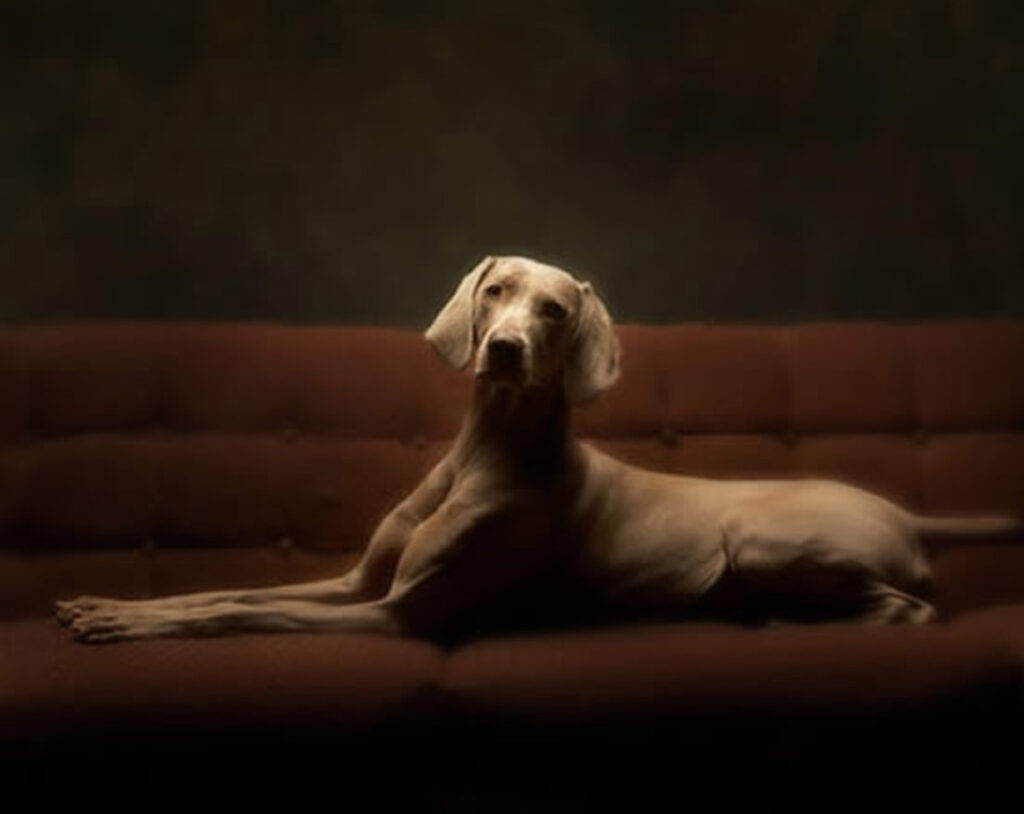 Dharma is the only Weimaraner in the history of the prestigious Morris & Essex Dog Show to win the group.

In addition, she was selected for the fist color cover of Weimaraner Club of America magazine. 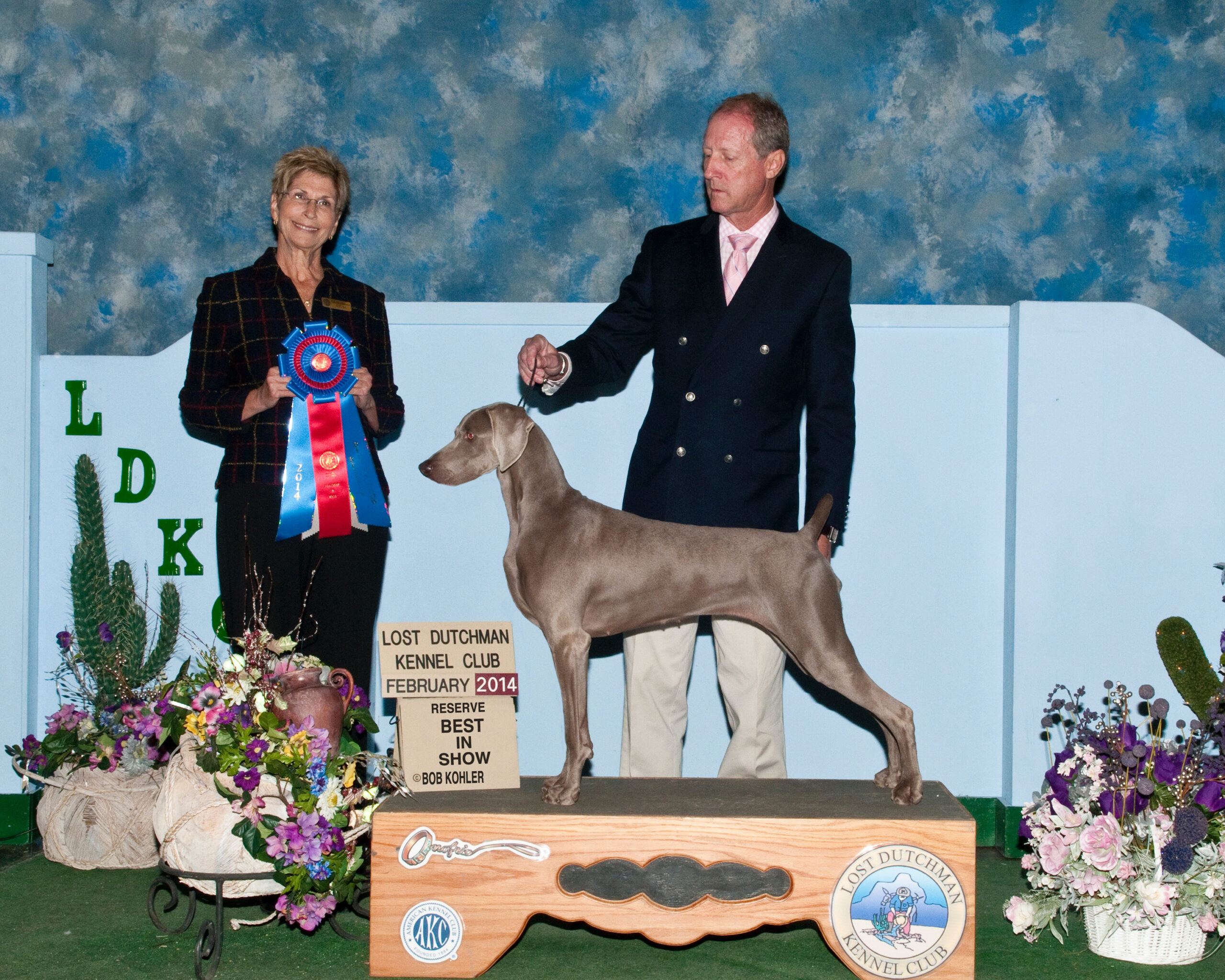 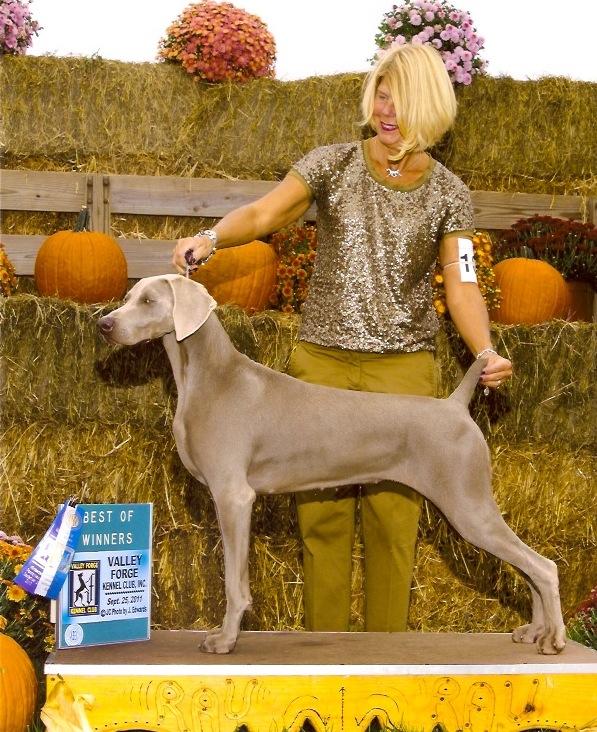 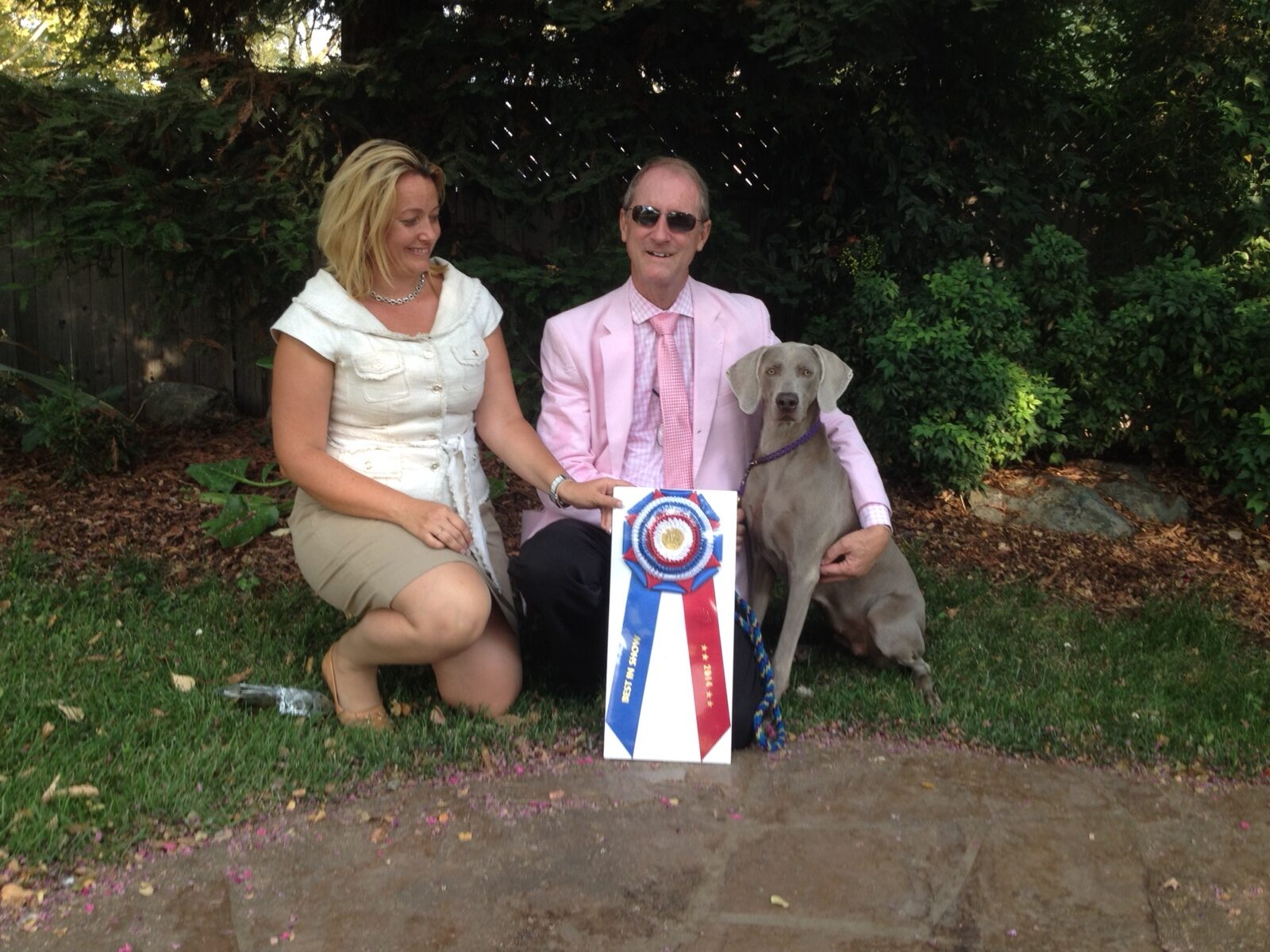 We were thrilled for the opportunity to co-own Honor with J. Logan & Ron Goularle. Handler Keith Pautz and Honor achieved #1 Weimaraner, All Breed Best in Show, Reserve Best in Show, WCA Best Bitch in Maturity and many Group wins and placements. We are forever grateful to Team Honor for a fun and exciting time! 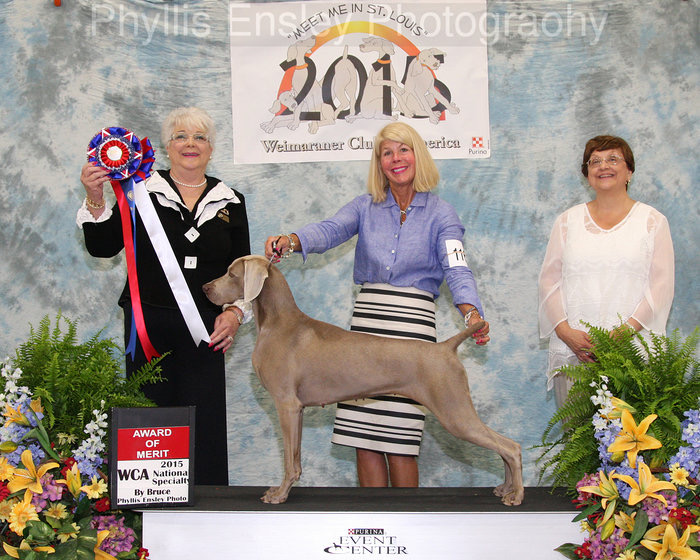 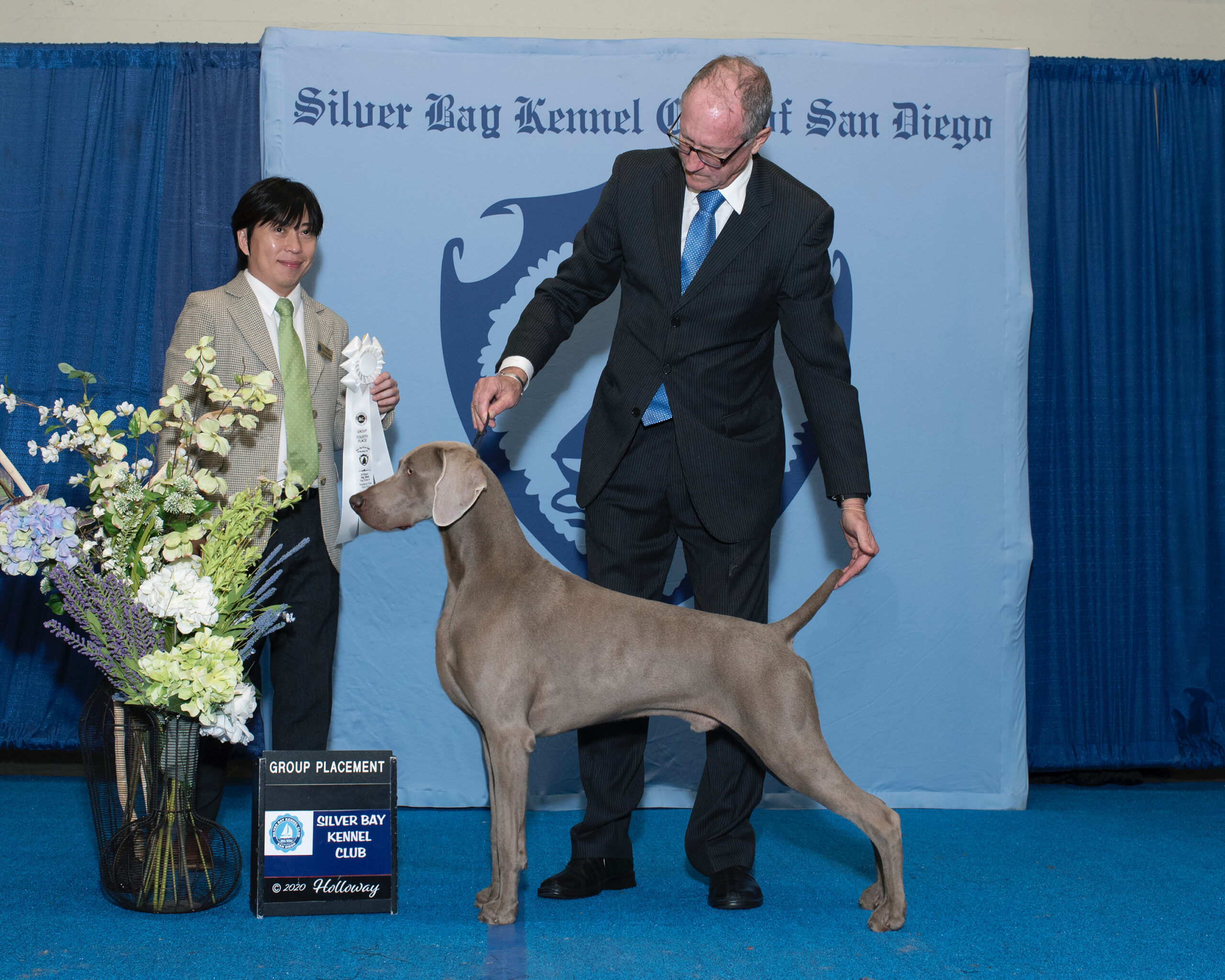 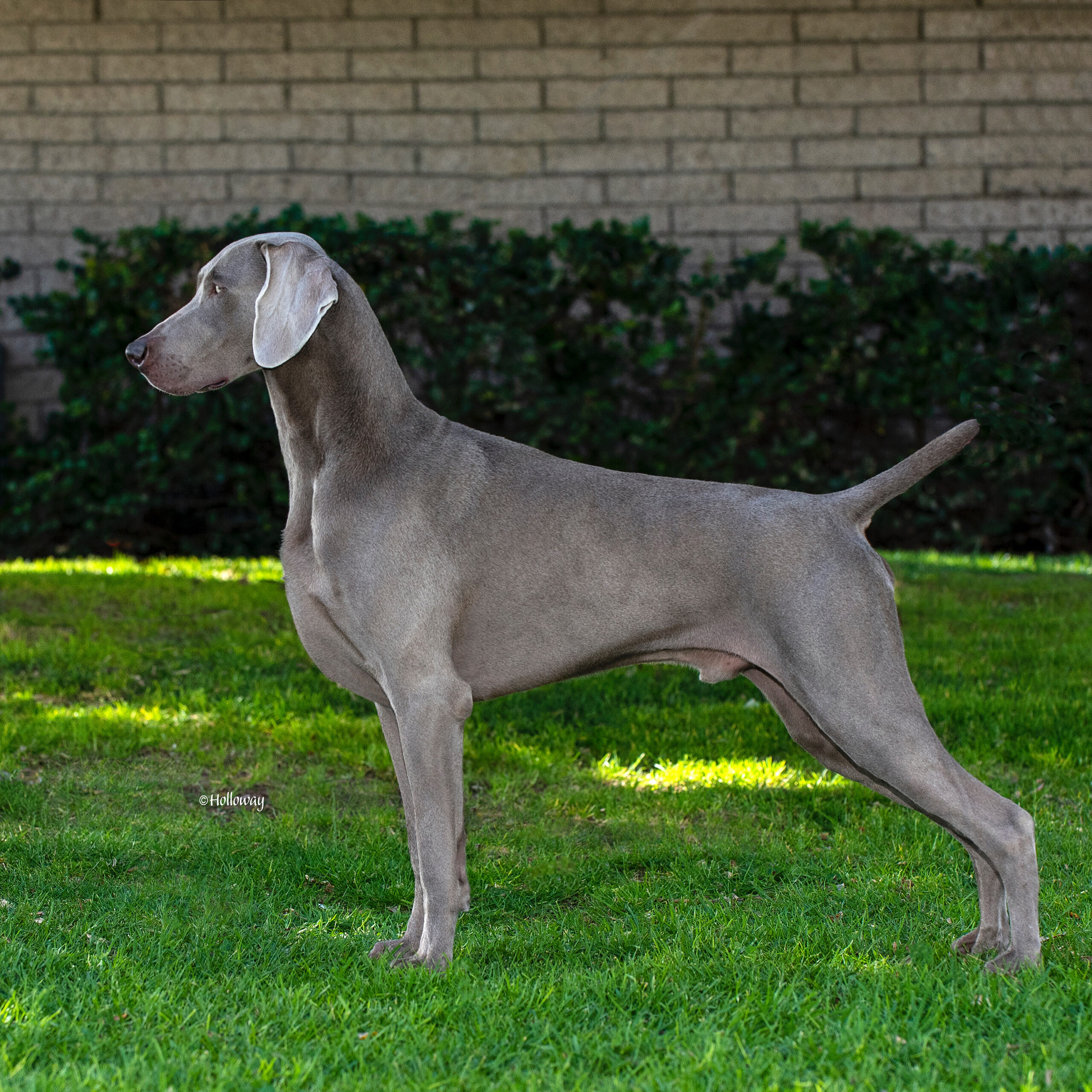 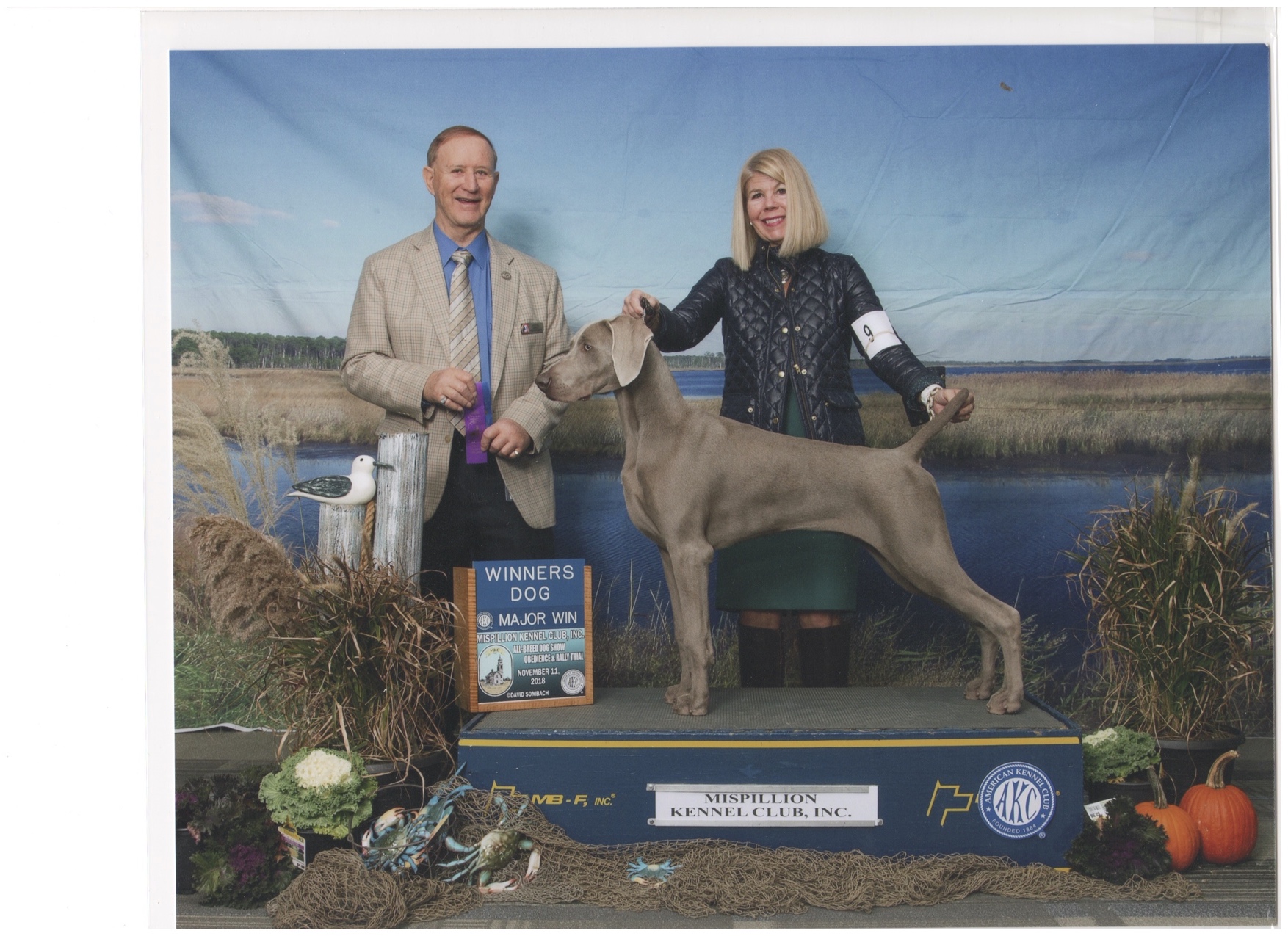 Roam embarked upon his specials career in January 2020, handled by Keith Pautz with new owners Dr. Bradley and Jo-Ann Rosenberg. We can't wait to see what Team Roam can accomplish! 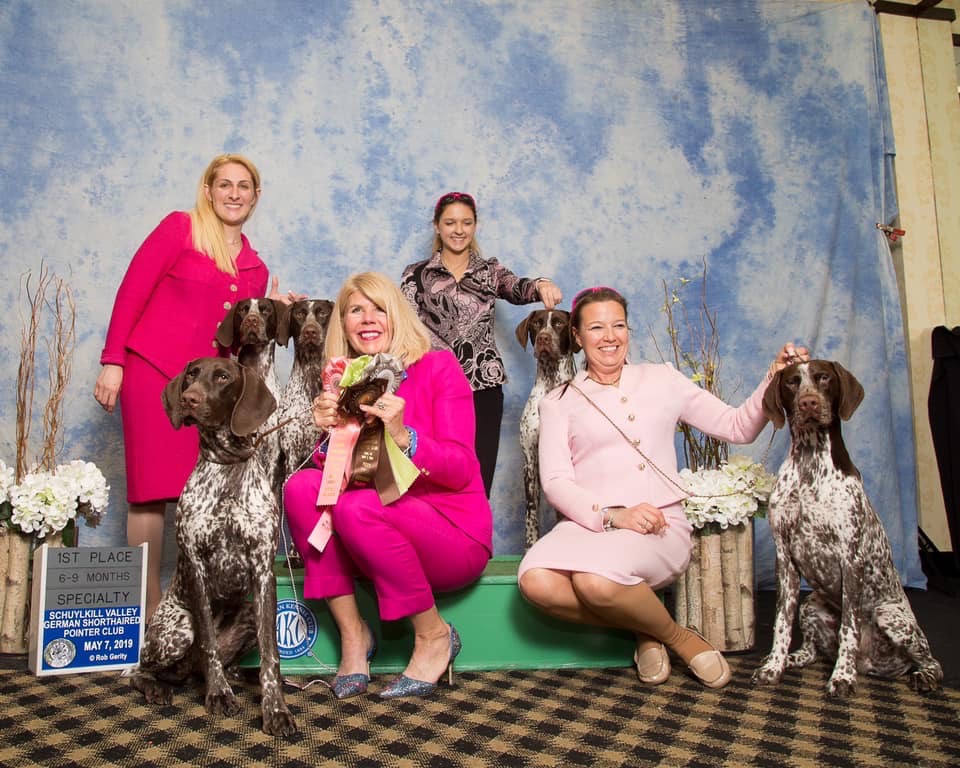 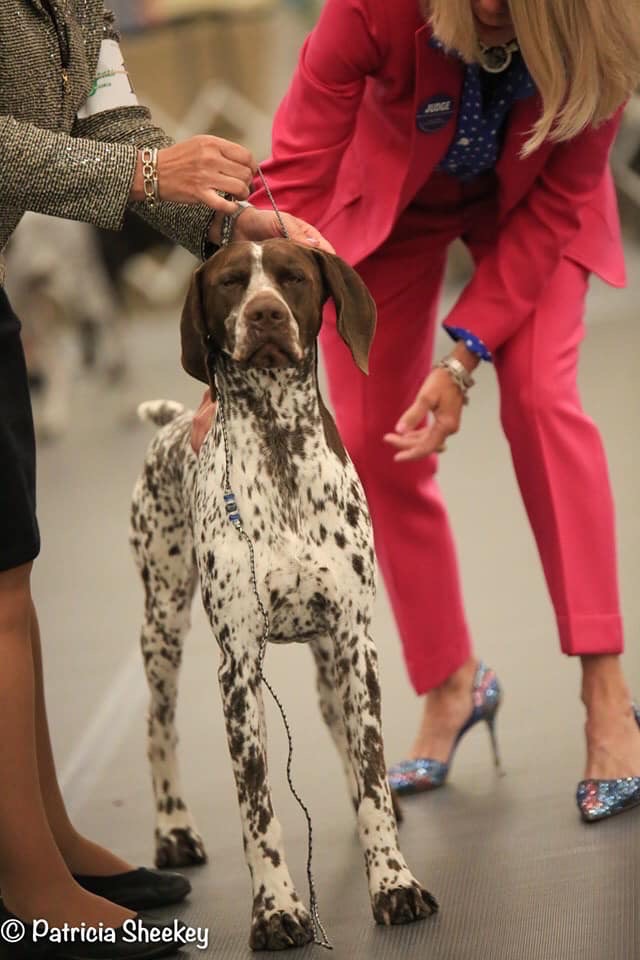 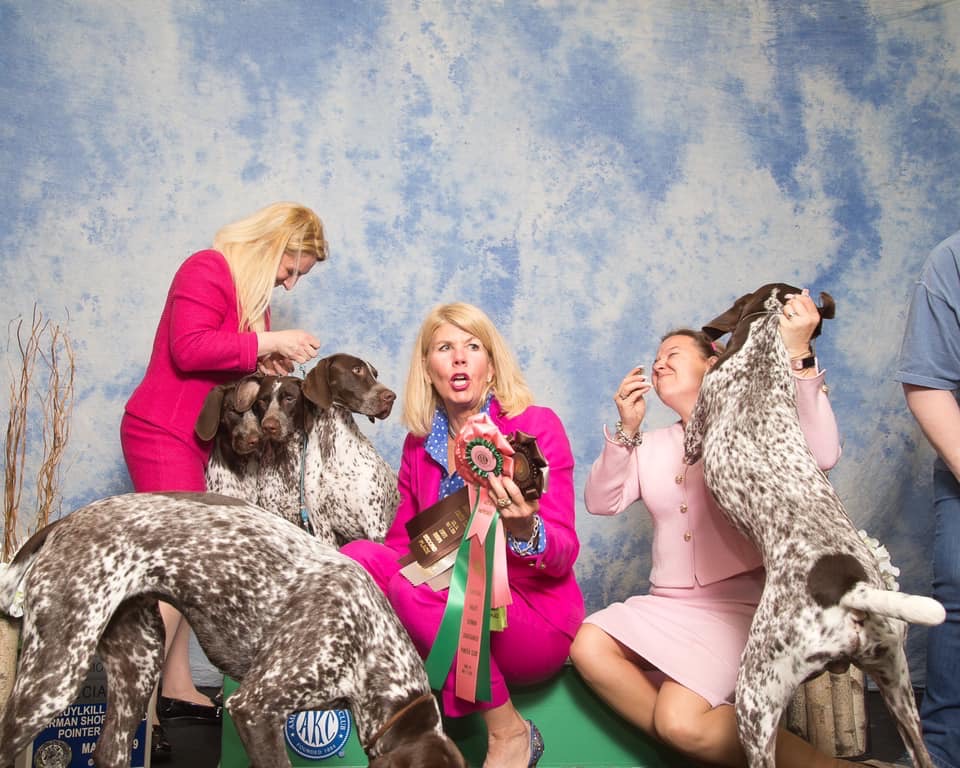 Jennifer was honored to be invited to judge the German Shorthair Pointer Club Sweepstakes in conjunction with their 2019 National Specialty. Although mayhem ensued, we ultimately achieved a beautiful picture. 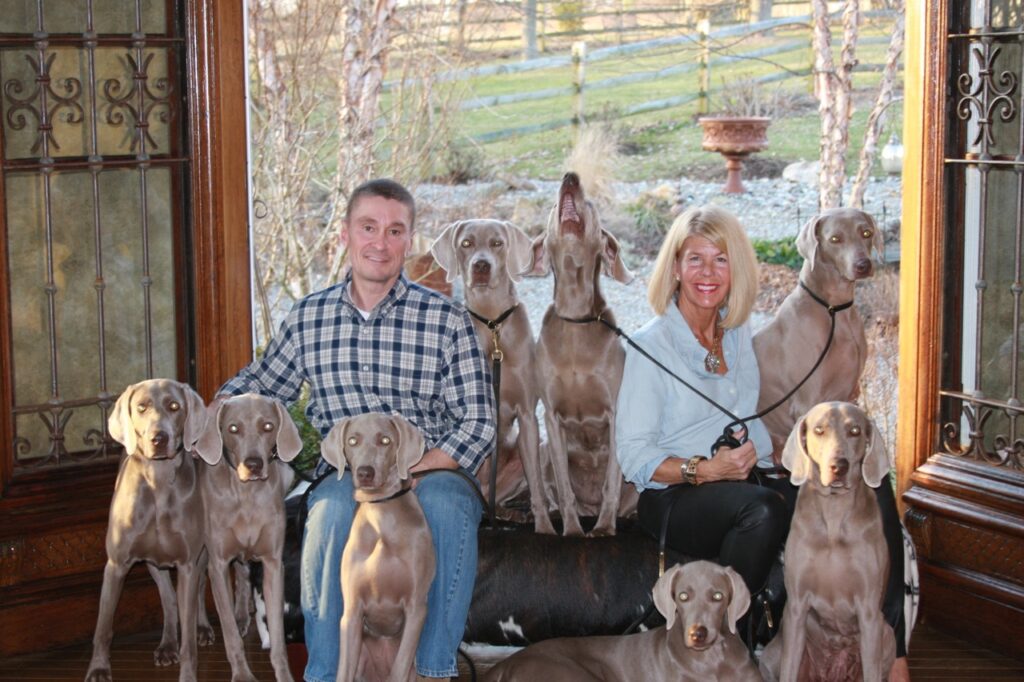 It has been my extreme pleasure to interview Jennifer Martin of Simpatico Weimaraners for this article. Jennifer is a loving “dog mom” who is excited about her dogs being sponsored by CANIDAE pet foods. She was approached by CANIDAE to be a part of their Special Achievers program after contacting them to ask questions about the food she was feeding her dogs. Such care and attention to detail as a responsible pet owner caught the attention of the CANIDAE representatives. Jennifer says that she is thrilled to let people know that her dogs get noticed, in the show ring, at the vet or on a walk, and that CANIDAE All Life Stages dog food is partly responsible for that.

As breeders, owners and handlers, Jennifer and her husband seek to ensure that Simpatico Weimaraners are the epitome of these three characteristics. The elegance, which makes a Weimaraner such a beautiful dog; the strength of character and breeding in these dogs; and the balance of temperament, mind and body. Simpatico Weimaraners are known for being exceptional examples of the breed, and Jennifer works hard to make that so.

Up early each morning to run 3-4 miles with the dogs and work with them, the Martins are dedicated to all stages of their dogs’ lives. While these dogs are “show dogs,” which basically means they are working dogs, Jennifer takes great pride that they are also their pets. The dogs are part of the family, and they live in the home and hang out together when they aren’t training or competing.

Jennifer and her husband originally became interested in the breed and wanted two puppies to raise as pets. A Weimaraner breeder sold them two littermates. According to Jennifer, who quickly learned, anyone knowledgeable about dogs and their pack mentalities would know that two litter mates should not be sold together. This is because one will become submissive and one dominant as they grow up together, just as a litter of six who stay in the same place will develop a leader and followers. Learning as they went, the Martins worked with those puppies and worked through the personality problems.

A few years and much wisdom later, Jennifer and her husband decided they would like to get another dog as well as learn more about the breed to begin showing dogs. Their first step was to contact Tom Wilson, the well known and reputable breeder of Smokey City Weimaraners. After several meetings with Tom to learn all they could and convince him they were the right couple to entrust one of his dogs to, he agreed to sell them a puppy. Because Tom believed in them, he selected a puppy with a strong pedigree and a champion dam.

That puppy, known as Avery, was finished by the novice handlers as their first show dog, and Jennifer’s husband handled Avery to a championship. Not only did they gain a champion dog they also formed a lasting friendship with Tom Wilson.

After Tom’s death, Jennifer used her own Smokey City Weimaraners to start her breeding program known as Simpatico Weimaraners. Out of respect for her friend and mentor, Jennifer did not continue the Smokey City name. She felt that if she did one of two things would happen, and either one would diminish the championship name. 1.) She would be trading on the rich history and success of the name instead of on her own merits, or 2.) She would not live up to what the Smokey City name stands for.

Her respect for Tom and the Smokey City name shows a great deal of character and self awareness. Jennifer is certainly doing something right, as Simpatico Weimaraners is now home to several champion dogs. A member of the AKC and the WCA, Jennifer is committed to responsible dog breeding, dog care and producing the best examples of the breed.

Jennifer and her husband are dedicated and responsible pet owners and breeders. When speaking with Jennifer I was impressed with her sympathy towards rescued dogs and dogs without homes. As a responsible breeder, Jennifer has an ironclad contract as well as a thorough application process that demands potential puppy owners meet with her and spend time with the dogs before being approved to be a home for one of her puppies.

Because Jennifer keeps all dogs that are to be trained for show, her puppies are only placed as pets, no showing or breeding, with a spay/neuter clause in the contract as well as a stipulation that the puppy never be sent to a shelter or rescue. All an owner has to do is return the dog to Jennifer if they are unable to keep it for any reason. Jennifer says all of her dogs have a forever home with her. She is also adamant that the AKC registration papers aren’t given to any new puppy owner until she receives written verification from a vet that the puppy has been spayed or neutered. She doesn’t want to be responsible for any unwanted puppies. Jennifer stands behind her dogs, from the amazing amount of love and attention each is given from birth through adoption, to the open door policy if an owner is unable to keep the puppy, and visits from her puppies when the owners go on vacation.

Knowing the quality of life and care that Simpatico Weimaraners come from, many people who are approved for puppies are put on a waiting list and have even waited up to two years for a puppy. The bitches aren’t bred until they retire from showing at about four years of age. The career of a show dog is fairly short; after that they get to be mommies and pets.

Jennifer and her husband have a whelping area where the dam and puppies are kept for several weeks. While they are in this area, Jennifer’s husband often sleeps in there with them, and the puppies are not left alone for any amount of time for the first 4-5 weeks of their lives. It takes real dedication for two people to handle the grown dogs with exercise, attention and training while babysitting several puppies for weeks on end.

Weimaraner puppies are born with striking blue eyes and stripes. They grow out of the striping, and many of their eyes change color. It is pretty much impossible to know in a puppy whether the eyes will stay blue or not. I spent a great deal of time looking at pictures on the Simpatico Weimaraners website and have to say these are gorgeous animals. You can see the love and care that is provided for them. My favorite is the picture of them all lying on the bed; there is no room for a human in that doggie pileup.

“Jennifer’s husband” as you’ve come to know him here, does have a name, but let’s maintain the mystery a little longer and I’ll tell you a little about what Jennifer says about her other half.

“My husband is the unspoken hero, he has a great sense of humor, and he supports me.” She goes on to say that because she and her husband do it all from start to finish with their dogs he is a big help and support, working by her side to raise and show the dogs. Each time she speaks she doesn’t say “I,” she says “We.” They are a team, and from the success of Simpatico Weimaraners I’d say they are a great team.

As a responsible pet owner and breeder, Jennifer advises that anyone who is interested in dogs and their breeding should pay attention to the dog laws that are being debated and instituted, be aware of dog happenings in your community and realize that just because a dog is in a shelter or rescue it doesn’t mean the dog is bad. Please visit the Simpatico Weimaraner website to see photos of these dogs and learn more about Jennifer and her husband Curtis.